Last week, I caught DubTopia! with Drake & Lasley at The Holding Company. It’s a monthly sketch show put on by DeDe Drake and Sherra Lasley. I know DeDe from improv class at the Annoyance and Sherra from slinging me beers at iO Chicago. What a treat.

Connor Tillman – a roller skate performance to the Pointer Sisters designed to top his sister’s recent stellar report card. Delightful. Followed by a

Claire Mulaney George – what happens when you’re a Turkish woman hosting a Friends viewing party and the TV craps out? You reenact each scene and give a play by play of what’s happening.
Neal Dandade – Man vs. Wild spoof complete with a worm in the urethra. Ouch.
Kristina Felske – Cribs spoof complete with rockin Sharpie drawn abs. Pump that bass.
Josh Logan – a robot desperately trying to be one of the guys in a frat.
Rebecca Krasny – the bare all discussions you have in a gym locker room after a tough workout.
DeDe Drake – Honey Boo Boo on the comeback trail, thanks to this inspiring talent manager.
Tim Baltz – an expecting father in the waiting room gets news that changes his life – his newly born son is 1/4 dog.

Videos by:
Midwest Bitties
Not So Grown Ups

With musical guest:
Kaylee Cole (she gave her own interpretation of Kanye’s Runaway – it was hilarious). 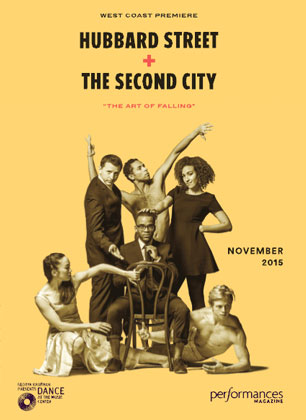 The Art of Falling

Take a risk. Fall in love. Let yourself go…

Hubbard Street Dance Chicago and The Second City bring their ingenious collaboration, The Art of Falling, to our stage, creating an unprecedented performance that’s lively, charming and adorably absurd. The brainchild of five choreographers, four writers and more than 30 dancers and actors, this show takes dance and sketch comedy to a whole new level.

I’ve seen several Second City main stage and etc. shows and I’ve loved them all, but this show was different. I suppose that’s the nature of the collaboration and physically having more space to play. Dance on a full airplane? Yep. Dance using office chairs? Yes. Falling from the sky with clouds passing? Yep. Dancers using their physicality to serve as office furniture, stairs and exercise equipment? YES! It’s a funny show, for sure, but the beauty of it is that the scenes are allowed to breathe. It’s fundamentally about relationships, truth and heart, with a few zingers/moments we might expect/anticipate at our own holiday dinners in the not too distant future.

The show’s main through line is a new relationship between two men and how one quickly falls in love while the other keeps his walls up – and the consequences of those walls.

The other through line is meta – an improviser that does corporate comedy shows – underpinned by a new hire who’s desperately trying to fit into her new company while her boss is seemingly oblivious to her name, function and seating arrangement.

Both through lines point to universal experiences – the desire to connect, trying to impress in the early stages of a relationship, the self imposed walls we put up to keep ourselves safe, what happens when our existing beliefs are unexpectedly challenged and what happens when we push beyond our comfort zones and try something new.

It’s a beautiful show. I hope it makes a return appearance because I’d love to see it again.

A couple other miscellaneous thoughts:

The opening to the second act is a stunning dance sequence between two sets of partners to a piano and a string instrument. It is simple, but stunningly gorgeous, and incredibly moving.

A chat with two audience members yielded an improvised dance number that was also lovely. Spirit animal – koala. Favorite show – Silicon Valley. Machine problem – shower head. It seemed like the dancers truly relished the opportunity to improvise the dances and what they showcased was impressive and extremely playful, mostly because they committed with their whole bodies (as you might expect) – from extended fingertips to tips of toes.

There was a throwback scene from a review a while back about a single guy and his lady lover for the evening that I personally thought was improved by replacing the original cast member with a dancer.

Having spent most of my life in Chicago, some of the references hit closer to home, including a ride on the L, a Divvy bike and a closing hat tip to Sheldon Patinkin, a member of The Second City Chicago in 1959 and eventual Artistic Consultant.

Take a risk. Fall in love. Let yourself go…